Book a Beer Tour for Oktoberfest 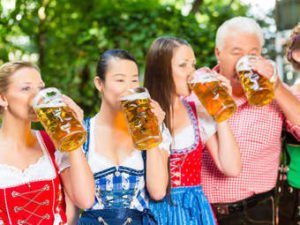 Oktoberfest has already begun and what better way to celebrate than with a nice cold craft beer? Although we’re not in Germany, we can still have some fun on our own right here in Santa Barbara. Craft breweries are popping up left and right, with more and more to choose from. In case you need to get into the Oktoberfest spirit, here are some fun facts about the 200 year old festival.

1. It actually starts in September

Although the name is based around the month of October, the festival actually starts in September and finishes off in October due to warmer weather.

Oktoberfest only uses locally brewed beer. They also brew the beer for Oktoberfest extra strong; all brews are at least 6%.

In the 200 years Oktoberfest has been around for, it has been cancelled almost 25 times. That means on average it’s cancelled every 8 years – yikes.

4. Nobody raises their mug until the Mayor says so

The mayor starts off the ceremony and no one drink until he says so, talk about powerful

Whether you’ve made a trip to Munich and stopped by the most popular beer festival in the world, or are just learning about it, this festival is something everyone should have on their bucket list. If you’re not feeling up for the 5,000 mile journey, celebrate with us in Santa Barbara on our public beer tour. Our tour is the only beer tour in town that uses open air trolleys – perfect for cruising all around downtown and sight seeing, even if you are a local.